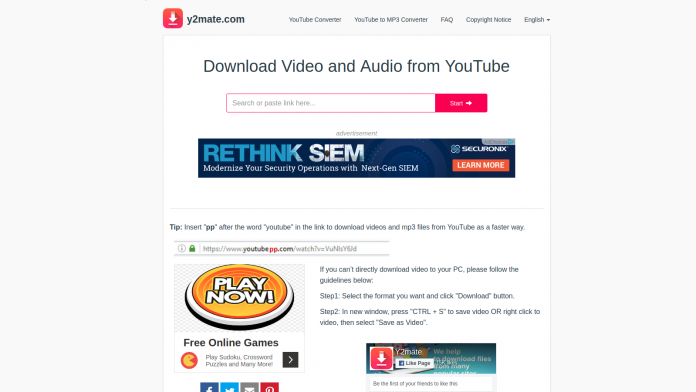 – The RIAA goes against yet another YouTube ripping service.
– The website is still up and running, but it will likely go offline soon.
– RIAA solidifies their case by providing three file hosting URLs in their letters.
The RIAA continues its campaign against piracy with a set of new DMCA subpoenas that target the operators behind Y2Mate.com. This website offers YouTube ripping services, and it a pretty popular one, counting about 64 million visitors every month. US rightsholders and especially music labels hate YouTube ripping websites because they take their ad shares out of the equation by enabling users to download any song or album locally and reproduce it without paying a dime. Being one of the largest websites of this type, it was a matter of time for Y2Mate to be targeted by the RIAA.

The two DMCA subpoenas that were submitted by the RIAA on the US District Court of Columbia target Cloudflare as the hosting service, and NameCheap as the domain registrar service. The main goal for the RIAA is to identify the person or people behind the Y2Mate service. To make their case stand firmly, the letters include proof of file hosting incidents, as the RIAA claims that users are able to download copyright infringing tracks from three URLs that are hosted by Cloudflare. As the established practice goes, DMCA subpoenas are only granted when the party accused of infringement is hosting the files.

While we have seen a case of a DMCA subpoena against individual being signed off by the Hawaii court recently, this RIAA against Y2Mate case is not related as the subpoena was submitted on different grounds. RIAA asks both NameCheap and Cloudflare for the name, physical address, IP address, telephone number, email address, payment information, and even account history and updates of the person behind Y2Mate.

With all that going on right now, the website remains online and in service as usual. Moreover, its operators don’t think that they are doing anything illegal at all, as they promote themselves merely as “technical service providers”, and place the responsibility of how this service is used to the visitors of the website. Clearly, this doesn’t play well with what RIAA believes, and as we’ve seen a couple of weeks back, they have made their stance clear by going against the YouTubNow website. This was also a ripping platform which also discouraged users from doing anything that goes against the copyright protection terms and conditions. Still, the RIAA obtained the subpoena against NameCheap, the host handed over the identification of the operator, and the website is now down.